West Virginians urged to fill out the 2020 census at www.2020census.gov

CHARLESTON, W.Va. — The U.S. Census is underway, and this year, West Virginia is playing a key role in the debut of two of the Census Bureau’s new initiatives as it works for a census response from every American.

The Non-Response Follow-Up program is also underway. Beckley was one of six cities nationwide to participate in the soft launch of the bureau’s community engagement efforts, where census takers visit non-responsive households and test systems and protocols before the nationwide follow-up operations begin on Aug. 11.

Though the ongoing coronavirus pandemic required modification of initial outreach strategies, during a press briefing hosted earlier this month Tim Olson, associate director of Field Operations, said efforts had been quickly made to accommodate crowd limitations, prevent unnecessary exposure and adhere to social distancing guidelines set by local governments and the Centers for Disease Control and Prevention.

By Wednesday, July 15, 91,800,000 households nationwide had completed the census via self-response, totaling 62.1 percent, with 49.6 percent of those households responding online.

By Friday, West Virginia was tied with Maine at 48th place in self-responses totaling 53.6 percent, or 530,000 households.

West Virginia’s overall online response rate has averaged about 35.1 percent, while Utah and Minnesota, who have recorded the most online response averages by mid-July, each had just over 60 percent.

“Many of the challenges we face are directly related to our geography,” Pritt said. “Rural, wilderness and other sparsely populated areas are often physically difficult to reach, and the lack of broadband – or any kind of Internet – access is especially limiting.”

“Census numbers are powerful data,” Pritt said. “And those numbers affect nearly every part of our lives.”

From funding for community services, education and healthcare to political representation at the state and federal level, Census data can ensure communities and states receive the support they need for the upcoming decade – but it requires public participation. If numbers do not accurately reflect population, it could result in less support.

“Unfortunately, the very people who would be most helped by accurately increased census numbers are often the least likely to respond – for a variety of reasons,” Pritt said. “We are working to inform West Virginia residents what’s in it for them, in addition to what’s in it for their communities.”

This year’s census is the first to offer online and phone response alternatives, which can assist residents who may be in transitional living situations, such as college housing and shelters, or those who have otherwise encountered obstacles with paper forms.

“Getting an accurate count will ensure that West Virginia gets its fair share for the next 10 years,” Pritt said. “West Virginia’s 2010 self-response rate was only 59.1 percent. We must do better this time around.”

Andy Malinoski, director of the Office of Marketing and Communications at the state Department of Commerce, echoed Pritt’s sentiments on the census’ great impact on the future of the state.

“It’s tied to almost everything [we] see and do,” Malinoski said. “… You don’t respond to the census, you’re actually harming your community because there’s less funding available to do the services that the government is structured to provide.”

Many services on which West Virginians depend are funded in part based on census data, he added.

“In reality, you’re talking about feeding children, building broadband, building roads, supporting healthcare … services that our communities need desperately that many, many West Virginians take advantage of or are beneficiaries of.”

Another factor lowering the response is concerns over privacy, Malinoski said. Census data, however, is protected and kept confidential in adherence to Title 13 of U.S. Code, and census workers are required to take an individual oath stating they will not share data. Census data is protected for 72 years after its collection, when it is then made public by the National Archives.

Debunking privacy concerns and helping West Virginians understand the ease and speed at which they can fill out the census could be the difference in receiving enough funding for emergency relief or not after a natural disaster, he said.

“There’s a lot of resources at stake; especially crisis and disaster response,” Malinoski said. “The flooding relief that is allocated to West Virginia through the Red Cross is based on census data. In places that have damage, if it’s undercounted, there’s less money going to those areas to respond to crisis or COVID-19 relief.”

Marketing officials, he added, have worked diligently to encourage more responses from those who are historically less likely to respond to the census, including renters, minority populations and single parents with children.

“We’ve been working to get our message and a response mechanism in front of those people,” he said. The good news I see is that those counties, since June 15, have seen a 15 percent increase on average of their response rates. They’re still very low – less than half the county – but at least the number is moving now and [the message] is starting to resonate.”

Malinoski is hopeful more West Virginians will step up to fulfill their civic duty.

“I hope that when we’re done we can turn around and West Virginia is at the top of the list in completion where in 2010 they were at the bottom,” Malinoski said. “That’s our overall goal.” 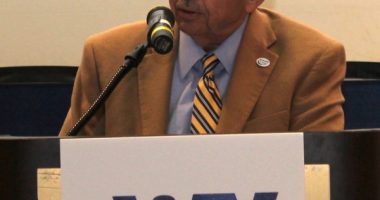 Release from the West Virginia Coal Association: CHARLESTON, W.Va. — Serving as president…
Campaign to focus on protecting 50-plus voters and making their voices heard…