“Samuel from Carol Miller’s Office is here to present a flag that was flown over the United States Capitol and she wants to pass it on to the family,” said Ford.

“Russel Roberson served selflessly on Iaeger’s Volunteer Fire Department for fifteen years. I wish I could thank him for all the bravery, courage and strength he exhibited while performing his duties over the span of his career,” said Miller in a letter delivered by Lusk to Roberson’s family Wednesday afternoon.

“His death was truly a catastrophe to the people of our state. He embodied how all West Virginians should strive to act – giving of one’s self for the betterment of others. His memory will always act as a reminder that there are true American heroes right here in our Allegheny Mountains.”

Lusk presented Roberson’s family the flag flown over the United States Capitol and a certificate of its authenticity.

“He was the love of my life for twenty years,” said Roberson’s longtime partner Lois Charley.

She also said Russel would be amazed to see the flag flown over the country’s Capitol in his honor, as well as a letter she had also received from President Donald Trump recognizing Roberson’s service.

“He would have given his shirt off his back, even if he didn’t like you,” said Charley. “He was the one with a kind heart, I’m the one that stays guarded all the time. He always said ‘You’ve got to give people a chance.’”

Charley said the night Roberson lost his life was still unreal to her, now just over a month later. She had noticed him coughing but thought he was okay, and responded to another house.

“I went to another house to evacuate three people and when I came back out, they told me he was in the ambulance. It was tough when I rode with him in the ambulance. We did everything we could and still couldn’t bring him back,” said Charley. “My son is going through the same stuff because he pretty much raised him, but he’s worried about me too. It’s just like a piece of your heart is missing.” 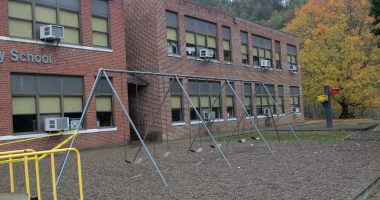